Ultranationalism threatens religious freedom, says report from Aid to the Church in Need 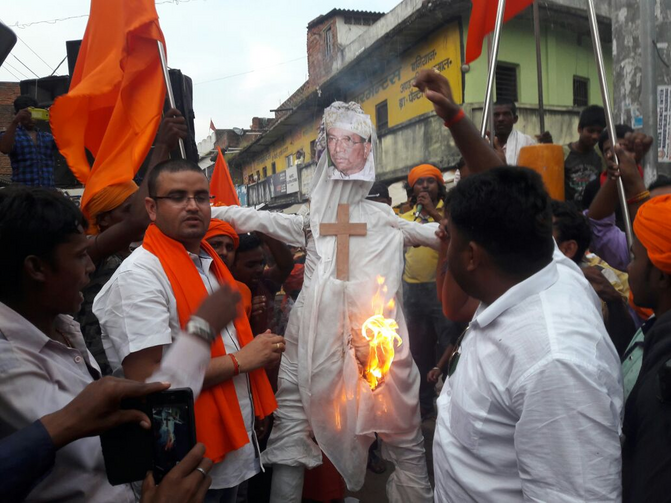 Hindu nationalists burn an effigy of Cardinal Telesphore Toppo, then the archbishop of Ranchi, India, in September 2017. (CNS)

WASHINGTON (CNS) — Ultranationalism is the chief reason behind the growing number of countries ranked worse than before on guaranteeing citizens their religious freedom, according to Thomas Heine-Geldern, executive president of Aid to the Church in Need.

One example was India’s “Hinduistic nationalist approach,” Mr. Heine-Geldern said, “which leads to condemning everyone who is a non-Hindu a non-Indian. Then comes the discrimination.”

Aid to the Church in Need is an international papal charity that provides pastoral and humanitarian aid to persecuted and oppressed Christians and supports various church projects in more than 140 countries.

The organization’s report, “Religious Freedom in the World 2018”—one of the few non-U.S. sources for unbiased documenting of religious freedom issues—cited the case of 10 Muslims who have been murdered by radical Hindus who are known as “cow vigilantes.” Cows are considered sacred in Hinduism. The report was released Nov. 27. (The Pew Research Center’s ninth annual study of global restrictions on religion, released in June, also noted can increase in the number of countries with restrictions on religion; see America’s round-up on the state of religious liberty worldwide.)

The report’s executive summary took note of documentation by the human rights group Persecution Relief, which said that last year, there were 736 documented attacks against Christians in India, more than double 2016’s figure of 358.

Last year, there were 736 documented attacks against Christians in India, more than double 2016’s figure of 358.

Compared to Aid to the Church in Need’s 2016 report, the religious freedom outlook is worse in Brunei, China, India, Indonesia, Iran, Kazakhstan, Kyrgyzstan, Libya, Maldives, Mauritania, Myanmar, Pakistan, Russia, Somalia, Tajikistan, Turkey and Yemen. State and non-state actors are cited in the report as the predominant violators of religious freedom.

In Iraq, Mr. Heine-Geldern said, “we cannot make people return” to their homes after the genocidal terror campaign waged by Islamic State earlier this decade that emptied many Iraqi towns of their Christian populations. “But for those who do want to come back, we can help them,” he told Catholic News Service in a Nov. 28 interview in Washington, where he was meeting with officials of the U.S. Conference of Catholic Bishops.

The recovery is fitful. “Religious Freedom in the World 2018” described a U.S. House hearing at which witness Stephen Rasche, a Chaldean Catholic from Irbil, Iraq, said Christian schools in the Christian-majority towns of Teleskov and Batnaya were not “completed” but instead were unusable. He charged they received only “one thin coat of paint on the exterior surface walls, with freshly stenciled Unicef logos every 30 feet.”

Aid to the Church in Need has started what it has called a “Marshall Plan” to rebuild Christian enclaves in Iraq.

Aid to the Church in Need has started what it has called a “Marshall Plan” to rebuild Christian enclaves in Iraq, although Mr. Heine-Geldern said “there are some places” in the country where it is advisable to not use that term. (The original Marshall Plan was a U.S. initiative to rebuild Western Europe after World War II.)

Even so, he noted, the charity was able to convince European governments of the need to reinvest in Iraqi infrastructure so it could focus on what Mr. Heine-Geldern called “pastoral needs.”

“We are, first, a pastoral charity,” he said.

Mr. Heine-Geldern added his job is “to listen” to the needs of dioceses as explained by their bishops, and to find sufficient financing for those needs where possible. Aid to the Church in Need last year approved 5,357 projects worldwide, including 1,212 construction projects.