NEW DELHI: In a sweeping order, the

has begun a massive judicial audit of all religious places and charitable institutions with regard to hygiene, assets, access and accounts, asking district magistrates to examine complaints in these respects and send reports to high courts that can treat them as PILs.

The SC order will apply to all temples, mosques, churches and other religious and charitable institutions in India and reports submitted by district magistrates, to be treated as PILs, could be the basis of high courts to pass suitable judicial orders.

“Difficulties faced by visitors, deficiencies in management, maintenance of hygiene, appropriate utilisation of offerings and protection of assets with regard to shrines, irrespective of religion, is a matter for consideration not only for the state government and the central government but also courts,” said a bench of Justices Adarsh K Goel (since retired) and S Abdul Nazeer last month.

This suo motu initiation of an exercise of such magnitude, given that India has over 20 lakh major temples, three lakh active mosques and thousands of churches, could well prove to be a huge strain on the judiciary, already groaning under a pendency of nearly three crore cases and further hamstrung by a large number of vacancies in district courts, HCs and the SC. Amicus curiae Gopal Subramanium informed the court that “there are 7,000 antique temples in Tamil Nadu alone”. 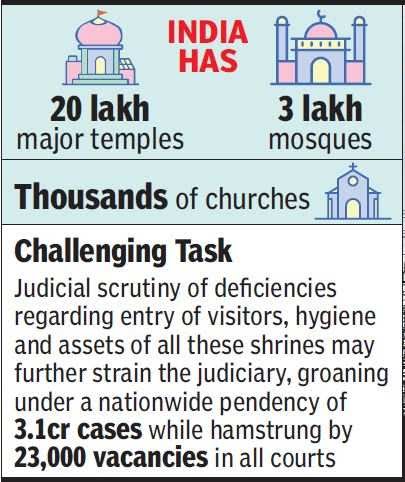 The informal nature of many shrines, particularly smaller ones, and the absence of specific rules governing their functioning in many instances will add to the challenge. The district judges may need the assistance of the local administration which will need to find the time and manpower to examine complaints.

While initiating a similar scrutiny for the Jagannath Temple in Puri on the basis of a PIL filed by one Mrinalini Padhi, the bench exponentially expanded the scope of the PIL to cover all shrines and charitable or religious institutions by permitting any devotee to move the district judge with a grievance about the management of visitors’ entry, hygienic conditions and assets and wealth.

“We direct that if any devotee moves the jurisdictional district judge throughout India with any grievance on the above aspect, the district judge may either himself/herself, or by assigning the issue/matter to any other court under his/her jurisdiction, examine the above aspects and if necessary send a report to the high court. We have no doubt that the HC will consider these aspects in public interest in accordance with the law and issue such judicial directions as necessary having regard to individual factual situation,” the SC said and posted the matter for further hearing on September 5.

The SC was of the view that the Puri Jagannath Temple, which allows the entry of only Hindus, should be thrown open to visitors of all faiths. It said: “The temple management may consider, subject to regulatory measures with regard to dress code and giving of an appropriate declaration or compliance with other directions, permitting every visitor irrespective of his/her faith to offer respects and make offerings to the deity.”

“We have noted that Hinduism does not eliminate any other belief and is eternal faith and wisdom and inspiration of centuries, as noted in earlier judgments of this court,” it said.

On reforms at Jagannath Temple, the bench asked senior advocate and amicus Gopal Subramanium to “engage with all stakeholders and give suggestions for bringing about improvements and also to give a report to the SC. However, this will not stand in the way of the committee of the state government, committee of the central government or any district judge considering matters in terms of the above directions”.

The SC had on June 8 entertained Padhi’s PIL, which highlighted difficulties faced by visitors to Jagannath Temple and their alleged harassment or exploitation by sevaks of the temple. It also pointed out the unhygienic surroundings of the temple, encroachments and commercialisation of rituals. The court had asked the Puri district judge to give an interim report by June 30.

The court ordered that no sevak or “panda” at the temple could put up individual “thalis” or “hundis” to receive donation from devotees and ordered the temple management to mount CCTV surveillance to make sure that all collections went to the temple fund, from which sevaks or pandas could be given monthly remuneration.

Speaking to TOI, Subramanium said he has visited the Puri Jagannath Temple on several occasions and that he would soon do so again to interact with all stakeholders, sevayats, sevaks and pandas as well as well-wishers. “I will also make an assessment of the Jagannath Temple’s assets and wealth. My mandate is to protect the temple rituals by drafting a scheme that would ensure welfare of the temple, its management, sevayats and pandas. The attempt will be to reach a consensus.”