Religious Freedom Is On The Decrease In India

Religious freedom in India continues to deteriorate and it has been on a gradual decline for at least a decade. As a result, the plight of religious minorities is reaching new levels. This despite the fact that the right to freedom of religion or belief is clearly recognized in the 1949 Constitution of India. Also, India acceded to the International Convention on Civil and Political Rights (ICCPR) and so pledged to adhere to the international standards of human rights enshrined in the treaty. Nonetheless, these guarantees prove not to be enough yet again. 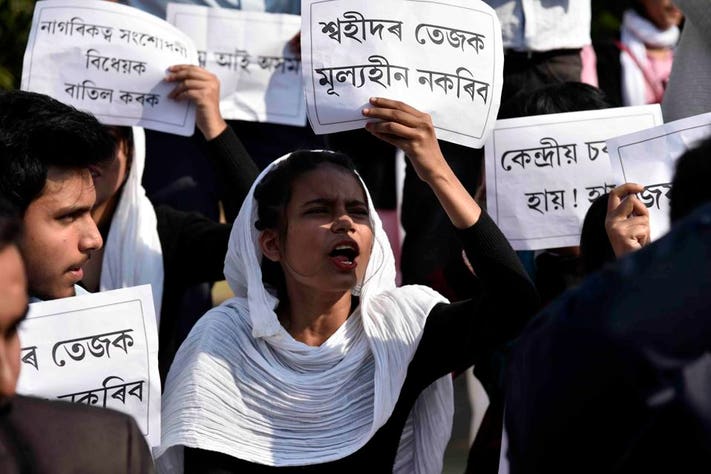 Guwahati Commerce College students stage a protest and raised slogan against Citizenship (Amendment) Bill, 2016 in Guwahati, Assam, India on Friday, January 11, 2019. India’s lower house passed legislation that will grant citizenship to members of certain religious minorities but not Muslims. The legislation is yet to be approved in the upper house. (Photo credit: David Talukdar/NurPhoto via Getty Images) GETTY

In its annual report, United States Commission on International Religious Freedom (USCIRF) identifies several limitations to the right to freedom of religion or belief and challenges faced by religious minorities in India. For example, Hindu extremism is on the rise with several of cases of harassment, intimidation and violence being committed against Hindu Dalits, Muslims, Buddhists, Jains, Christians and Sikhs. USCIRF identified groups such as the Rashtriya Swayamsevak Sang (RSS), Sangh Parivar and Vishva Hindu Parishad (VHP) who are responsible for an organised campaign of alienation against non-Hindus or low-caste Hindus.

Indeed, the issue is serious. The Union Minister of State for Home Affairs, Hansraj Ahir, reported that in 2017 alone, 111 people were killed and 2,384 injured in communal clashes. The level of violence is expected to increase as the perpetrators continue to enjoy impunity for their crimes. Similarly, as the victims of such atrocities are forgotten by the government, they have little faith in ever seeing any justice done. This can only lead to ever-growing mistrust between the government and religious minorities in India. Nothing will change unless the government takes decisive steps to address the issue of religiously motivated violence.

Anti-conversion laws have been adopted in several states, including Odisha, Madhya Pradesh, Chhattisgarh, Gujrat, Arunachal Pradesh, and Himachal Pradesh. Such anti-conversion laws prevent people from practicing their faith freely, their guaranteed right under international law. These laws do not only adversely affect the enjoyment of the right to freedom of religion or belief, they also violate the special protection of the rights of minorities enshrined in Article 27 of the ICCPR as they are predominantly deployed against religious minorities.

USCIRF reports that the anti-conversion laws have been used against Muslims and Christians engaged in proselytization. The report tells the stories of how liberal the provisions are used, for example:

A Catholic nun, along with four tribal women, were detained in June 2017 based on suspicion of induced conversion. In April 2017, three Christians were arrested in the Khandwa district based on allegations that they were converting people. In July 2017, Christians protested in Ludhiana, Punjab, after Sultan Masih, the pastor of the Temple of God Church, was murdered in public based on suspicions of his engaging in the conversion of others.”

While conversion from Hinduism to other minority religions has been closely enforced with the threat of such conversions triggering criminal charges, conversion (including forced-conversions) of non-Hindus to Hinduism continues to be practiced with relative impunity. According to USCIRF, “These ceremonies are based on the view that all individuals born in India are Hindus by default, even if their communities have practiced other faiths for several generations.”

The anti-cow slaughter laws have deep roots in Indian tradition. The laws have been upheld by India’s most powerful Court, the Supreme Court of India. However, in recent months a new phenomenon has emerged; “cow protection” lynch mobs. USCIRF reports that such groups have murdered at least 10 people in 2017. Furthermore, groups of mobs have instigated a campaign of harassment and intimidation against individuals who work in the dairy industry (an industry that does not perform cow slaughter).

The issues are pilling up for religious minorities in India. In order to ensure that everyone enjoys the right to freedom of religion or belief, India needs to put in place an urgent and comprehensive response. Cases of religiously motivated violence or violence against religious minorities need to be fully investigated and the perpetrators brought to justice. Victims of such atrocities need to be provided with assistance. The anti-conversion laws need to be repealed to give full effect to India’s international law obligations.

Ewelina U. Ochab is a legal researcher and human rights advocate, and author of the book “Never Again: Legal Responses to a Broken Promise in the Middle East.”

Ewelina U. Ochab is a human rights advocate and author of the book “Never Again: Legal Responses to a Broken Promise in the Middle East.”