Pastor in India Driven from Home after Police Torture, Threats

Officers arrive with news reporter, reviling him and Christianity. 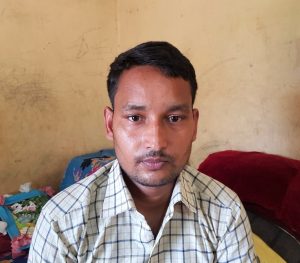 NEW DELHI (Morning Star News) – A pastor in northern India was forced to leave his village and flee with his family more than 600 miles away after police last month tortured and threatened him, he said.

Officers in Uttarakhand state on June 13 arrested pastor Sanjay Kumar Bharati, his wife, children and several members of his church in Shyampur, Haridwar District on a complaint of violating COVID-19 restrictions, but as police were beating him their questions and accusations concerned only conversion to Christianity, he said.

Pastor Bharti said officers began beating him as soon as he entered the Shyampur police station. Reviling him and Christianity, they interrogated him as they continued to hit him, he said.

“As soon as I was taken inside the police station, a policeman slapped me three or four times on my face and punched me in my stomach,” Pastor Bharati told Morning Star News. “He hurled curses and accused me of alluring people and converting them.”

They then took him to an inner room, where they made him lie on a bed. One of the officers removed his leather belt and began to strike him on his legs and feet, he said.

“Hell broke open on me as they mercilessly tortured me for 30 to 40 minutes,” he said. “I begged them to spare me; repeatedly I asked them, ‘What was my fault?’”

Denying all allegations, Pastor Bharati answered that he lived in a humble rental and would not be in such dire economic condition if he received outside funds, he said.

“I have not changed anybody’s religion,” he told the officer. “People invite me to their homes to pray for them, and I do. These are all false allegations and rumors about me.”

Police treated him as if he were a dangerous criminal, he said.

“For a few days I was in much pain, with swelling on my legs and face,” Pastor Bharati told Morning Star News. “Blood oozed out of my ear after the repeated slaps, and I was unable to hear from that ear for a week.”

Calling him an outsider, officers asked how he could come and live in the village and lure people to convert. The pastor moved to the village 12 years ago.

“Haridwar is an important Hindu pilgrimage site, how could you dare to live here and propagate Christianity?” a policeman said, according to the pastor, who answered that he does not need permission from anyone to settle anywhere in India.

Before releasing him, the officer ordered him to leave the village, warning that if they received just one more complaint of conversion, they would arrest him and send him to jail, he said.

Police arrested Pastor Bharati and the others on the verbal complaint of 10 residents of Shyampur, alleging he was conducting a church service in violation of COVID-19 restrictions, sources said.

Making the arrests at 11 a.m. on Sunday, June 13 as guests prayed at the house of a church member who had invited about 20 Christians, three officers stormed into the home accompanied by a news reporter who took photos of them, Pastor Bharati said. Police confiscated Bibles and other books.

The pastor apologized to police for accepting the invitation to visit the church member’s home during meeting restrictions, expecting to receive a verbal warning at most. He was stunned that officers took him to the police station and beat him without showing him any written complaints against him.

“Though the complaint against me was apparently meeting during COVID restrictions, the policeman inside the police station questioned me only regarding ‘alluring villagers to convert,’” he said.

The Rev. Babu Samuel, Pastor Bharati’s mentor, said he was deeply disappointed in the officers’ brutality.

“Even if we take the matter to the higher authorities, how can we prove the assault?” Pastor Samuel said.

A friend of Pastor Bharati, pastor S.B. Sahi, came 37 miles from Dehradun the day after the assault and went to the Shyampur police station to question the officers.

Christian leaders urged the pastor and his family to leave the village to safeguard their lives and helped him move to an undisclosed location. Pastor Bharati’s three children are ages 11, 7 and 2.

The village head, Anil Singh, asserted that he never should have allowed Pastor Bharati move to his village.

“It is my fault entirely for allowing him to live in my village,” Singh told Morning Star News. “I consider it 100 percent wrong that he came to our village and visited a house and told them that if they prayed, they would find peace. I don’t support this at all.”

Singh said that several times he has proposed to police that they carry out “verification drives” to monitor people from outside the village.

Pastor Bharati said he got medical tests at a government hospital as evidence of the assault.

The hospital authorities initially declined to do the medical tests without instructions from the local police station, but after Pastor Sahi spoke to the District Superintendent of Police by phone, the DSP instructed hospital staff to carry out the tests, sources said.

Pastor Bharati, his wife and four church elders visited the the DSP in Haridwar on June 15 to submit a written complaint stating how officers tortured him at the police station. Soon his landlord asked him to vacate the house he had been living in for the past five years, he said.

No one else in the village would rent to him, Pastor Bharati said.

“Everybody is scared of the police and the people who have been opposing my faith and propagation,” he said.

His church had 150 members at one point, but continuous opposition from villagers had driven the number down to 50, he said.

“The villagers called for a meeting and threatened all those who were attending the fellowship to desist, or else they would be ostracized,” Pastor Bharati told Morning Star News.

Sub-Inspector Ravindra, who goes by a single name, said Pastor Bharati had submitted a written complaint with the DSP alleging brutality by Shyampur police but later requested that the enquiry go no further.

“I met Bharati yesterday [June 30], and he gave it in writing that he does not want any enquiry against the local police station,” Ravindra said.

Pastor Bharati told Morning Star News that he does not want to undergo further suffering for himself and his family by pursuing the complaint. The arrest and opposition have already left him destitute, said attorney Rohit Singh, who visited the pastor on June 15.

“I and my wife were shocked to see Sanjay’s financial condition,” Singh told Morning Star News. “There was not a grain of rice in his house to feed the children.”

Ravindra returned the confiscated Bibles and books when Pastor Bharati withdrew his complaint in writing on June 30.

Without any source of income, Pastor Bharati moved his family from Shyampur on July 6, relocating nearly 650 miles away.

Deeply concerned for the Christians he left behind, Pastor Bharati said that he gets calls from them every day detailing the pressure from villagers to abandon their faith.

“I do not know for how long they will be able to hold on,” Pastor Bharati said “Not everybody is strong to face opposition – only the ones who have had the experience know what it is to face the brutality of the police or to be ostracized.”