Swamy has been questioned in the case on multiple occasions.
9 hours ago | Sukanya Shantha 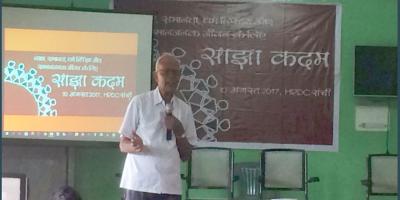 Mumbai: The 83-year-old Jharkhand-based tribal rights activist and Jesuit priest Father Stan Swamy became the oldest person in India to be charged with terrorism-related offences when the National Investigation Agency took him into custody in Jharkhand on Thursday night.

Swamy, who has been questioned on multiple occasions in connection with the ongoing investigation in the Elgar Parishad case, is the 16th person to be arrested and charged since June 2018.

The case stems from a public event held in Pune on December 31, 2017, where, the police and NIA claim, inflammatory speeches were delivered which led to violence in Maharashtra and that the event in question had Maoist links.

Senior lawyer Mihir Desai confirmed that the NIA team reached Swamy’s residence at Bagaicha in Namkum, Ranchi in the evening. He was apparently taken away to the NIA office without a warrant. His colleagues, who were present when the NIA reached Swamy’s house, told The Wirethat the NIA sleuths acted in a highhanded fashion and refused to show a warrant or give the grounds of arrest. “They were rough and arrogant,” one of Swamy’s colleagues told The Wire.

Swamy, who is suffering from multiple ailments, is a veteran tribal rights activist based in Jharkhand. Originally from Kerala, Swamy spent close to five decades in the tribal region of Jharkhand working on the forest rights of the Adivasi community. He has been a critical voice in the region against police excesses and the government’s failure to properly implement the fifth schedule of the constitution in the state. He had also from time to time questioned the indiscriminate arrests of Adivasi youths in the state.

During the BJP government’s tenure in Jharkhand, Swamy and his colleagues were booked for sedition but the charges were eventually revoked after the Jharkhand Mukti Morcha led by Hemant Soren came to power.

Swamy had anticipated his arrest for a while. Two days ago, he had recorded a long video stating the circumstances in which the central agency was interrogating him. In another written message, which was forwarded to rights activists, lawyers and journalists just hours before Swamy was taken away by the NIA, he wrote: “I was interrogated by the NIA for 15 hours during a span of 5 days (July 27, 28, 29, 30, Aug. 6). Apart from my bio-data and some factual information, several extracts allegedly taken from my computer implicating my connection to Maoist forces were placed before me. I told them all these are fabrications stealthily put into my computer and I disowned them.”

He further added, “The nature of the present NIA investigation of me has nothing to do about the Bhima-Koregaon case in which I have been booked as a ‘suspected-accused’ and consequently raided twice (28 August 2018 and 12 June 2019). But it had everything to do to somehow establish (i) that I am personally linked to extremist leftist forces, (ii) that through me, Bagaicha is also relating to some Maoists. I denied both these allegations in the strongest terms.”

Swamy said that he was being summoned to NIA’s office in Mumbai, where the investigation in the case is being carried out. Swamy had, however, expressed his inability to travel long distance amid the raging pandemic. “I have informed them (i) that I fail to understand the need for interrogating me further given the fact I have been subjected to that for 15 hours already, (ii) that I am not in a position to undertake the long journey given my age (83) and the nature of the epidemic ravaging the country. Besides, Jharkhand State Govt has given a directive that during the lockdown period, elderly persons above the age of 65 may not appear in public, (iii) that if the investigating agency wants to interrogate me further, it can be done through video-conference.”

In his letter, Swamy says he is “hoping human sense will prevail” and if not, he must be ready to face the consequences. And on October 8, the NIA took him into custody.

The Elgar Parishad case was originally investigated by the Pune police. But after the BJP government led by Devendra Fadnavis fell in Maharashtra and a tri-party government of the Shiv Sena, Nationalist Congress Party and Congress took charge in the state, the Central home ministry decided to move the case away from the local police to the NIA. The NIA, since January, has arrested six persons, including Swamy. The agency is likely to file its first chargesheet (the Pune police had earlier filed two chargesheets) in the next few days. The NIA’s chargesheet is expected to be filed against academic and civil liberties activist Anand Teltumbde and activist and journalist Gautam Navalakha.

The first chargesheet was filed by the Pune police, which ran to over 5,000 pages. The police had claimed that those arrested had “active links” with the banned Communist Party of India (Maoist) and had helped organise the ‘Elgar Parishad’ of December 31, 2017, under the banner of the ‘Bhima Koregaon Shaurya Din Prerana Abhiyan’ in Pune.

The police’s case is that this cultural gathering in Pune’s Shaniwarwada area, known to be a predominantly Brahmin hub, had incited Dalit youth across Maharashtra against the Bharatiya Janata Party and ‘Brahmin-oriented Rashtriya Swayamsevak Sangh’, leading to violent retaliation across the state. The speeches given at the Elgar Parishad were allegedly inflammatory, and carried the intention of “harming the democratic fabric of the country”.

A supplementary chargesheet was filed later in February 2019 and the state police had claimed that fugitive Maoist leader Ganapathy is the mastermind behind the Elgar Parishad.

The People’s Union for Civil Liberties (PUCL) has issued a statement condemning Swamy’s arrest. In the statement, PUCL members have stated that they “are shocked by and condemn the detention and arrest”.

“The inhuman and insincere act of the NIA authorities in arresting Fr. Stan stands out for its sheer vindictiveness for Fr. Stan fully cooperated with the Investigating officers of the NIA when they questioned him in the Jesuit Residence in Bagaicha for over 15 hours, on July 27th, 28th, 29th, 30th and 6th August. Despite his advanced age and other age related ailments, Fr. Stan patiently answered all queries put to him. It should be noted that Fr. Stan’s residence was raided on 28th August, 2018 by the Pune Police then in charge of the BK case and his laptop, tablet, camera etc were seized,” it continues.

The organisation has further stated that Swamy’s arrest by the NIA is “malicious and spiteful” as Swamy has consistently denied any link with extremist leftist forces or Maoists. “He had also clearly told the NIA that some so called extracts allegedly taken from his computer shown to him by the NIA were fake and fabricated and that he disowned them. What also exposes the NIA action as motivated is revealed by the fact that in October, 2018, the police told the Bombay HC that Fr. Stan was only a suspect and not an accused.”

“PUCL would like to point out that the true reason for NIA arresting Fr. Stan Swamy today is because he had dared to expose the large scale abuse of anti-terror and sedition laws by the previous BJP-led Jharkhand government. Thousands of Adivasis were falsely implicated and arrested for exercising their fundamental right of protest in the Pathalgadi movement and kept in prison without hearing. Fr. Stan’s meticulous documentation of the untold suffering experienced by Adivasi youth, hundreds of whom were imprisoned for no offence at all, earned the ire of the police and the state which launched a witch hunt against Fr. Stan and some others in the human rights movement in Jharkhand. The data analysis of thousands of adivasis arbitrarily arrested by the police was also put in an affidavit in a PIL filed before the Jharkhand high court which upset the Government.”

Samy, PUCL said, has always professed his commitment to the Constitution of India and peaceful means of expressing dissent while questioning abuse of power by state executive and police. Through his arrest, the NIA is yet again sending a message to the rest of the human rights community that there is no level to which they will not stoop to silence and crush dissent, the group argued.