Madhya Pradesh is the latest BJP-ruled state to introduce an anti-conversion Bill.
Mar 02, 2021 | The Wire Staff 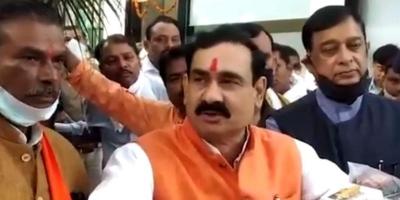 New Delhi: The BJP government in Madhya Pradesh on Monday introduced in the assembly a Bill that replaced an ordinance brought to check religious conversions through ‘marriage or by any other fraudulent means’.

The Bill replaced the ordinance, cleared by the cabinet in December and promulgated in January, which had provisions of ten years imprisonment in some cases and a hefty fine for violators.

Sign up to receive Persecution Relief Daily News
Home minister Narottam Mishra presented the Madhya Pradesh Freedom of Religion Bill, 2021, in the house. This is the first stage to enact a new law. Now the Bill will be taken up for consideration.

“The house has allowed it to be introduced. Now it is a house property. Members can suggest amendments, they can study it for further action,” said a senior official of the assembly secretariat.

Governor Anandiben Patel on January 9, 2021 assented to the Madhya Pradesh Freedom of Religion Ordinance, 2020, which penalised religious conversions through fraudulent means, including those for the sake of marriage. The ordinance penalised religious conversions by misrepresentation, allurement, use of threat of force, undue influence, coercion, marriage or by any other fraudulent means.

Last month, home minister Mishra had said as many as 23 cases were registered under the ordinance within a month of it coming into force. He had said the highest number of seven cases were reported in the Bhopal division followed by five in Indore, four each in Jabalpur and Rewa, and three in the Gwalior division.

Many other BJP-controlled states, such as Uttar Pradesh, Haryana, Karnataka and Gujarat, have either introduced similar Bills or have mulled them. Though these laws ostensibly target ‘forced religious conversions’, they have been used to target interfaith couples. It has been seen as an attempt to legitimise the Sangh parivar‘s imagined conspiracy theory of ‘love jihad’, which claims that Muslim men ‘lure’ Hindu women into wedlock for the purpose of converting them to Islam.