Chhattisgarh a growing flash point for violations of religious freedom.

December 8, 2020 By Our India Correspondent 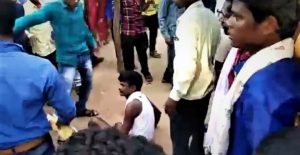 NEW DELHI (Morning Star News) – Representatives of eight village councils in central India first summoned a new Christian to give him an ultimatum in October.

They interrupted a church service on Oct. 18 asking for Sattar Singh Markam.

At the joint meeting in Bargaon, in Chhattisgarh state’s Gariaband District, they told Markam to renounce Christ or “leave with your Christian faith and never come back,” Pastor Sahu said.

Markham, who was suffering three epileptic seizures a day before he put his faith in Christ 12 years ago, told them the Lord had healed him and given him life and that he would never turn away from his Christian faith.

A week later, on Oct. 25, a tribal mob of about 300 people incited by radical Hindus attacked his house after his church, which meets there, had finished worship. Two women remained inside, praying, when the mob arrived and began manhandling and arguing with them while Markam was working in his field. The mob also damaged his house.

When he returned, the women left, and the mob began arguing with him.

As they told him to leave Christianity or face the consequences, Markam told them how he was miraculously healed through Christ. They scoffed at him and began slapping and pushing him, he said. Markam fell to the ground, and the mob beat and kicked him.

“They kept asking me, ‘Now tell us, will you leave your Christian faith and come back to your ancestral faith?’” he told Morning Star News. “I replied, ‘If I had not found Christ, I wouldn’t be alive today; I will not leave Christ at any cost.”

The mob left after beating him, Markam said.

“While they went,” he told Morning Star News, “they told each other, ‘He will not agree like this – let us attack his livelihood, his fields. When we harvest his crops, he won’t be able to sustain his family and survive in the village without food and money. He will automatically leave the village and flee.’ I am so shaken by what I overheard.”

The next day he filed a complaint with the Sobha police station. Officers registered a First Information Report under Indian Penal Code sections for obscene acts, voluntarily causing hurt, criminal intimidation, destruction, damage or defilement of a place of worship and criminal acts done with common intention.

Police have made no arrests, Pastor Sahu said.

Markam and his family have faced opposition for their faith since they became Christians. At a large meeting in a nearby village 11 years ago, they pressured him to leave Christ, deciding to socially boycott him and his family when he refused. He could not speak with, buy from or sell to anyone in the village.

Nor would anyone work for him.

“For 11 years, Markam has cultivated his land by himself with no help,” said Pastor Sahu. “People are afraid to work even as hired hands on his field because of the warnings. He has suffered much for Christ’s sake, but it has not deterred him from his faith.”

“Outsiders and nontribal people are the ones instigating these attacks,” he said. “There is absolute political silence on them, and the inaction of the police is the only answer we get. The tribal belt in Bastar region [including Gariaband District] is simmering, and a large-scale ethnic violence can erupt at any moment.”

In recent years Hindu nationalist groups have targeted tribal people through propaganda and social programs, leading many to believe that they were originally Hindus. Tribal Christians have maintained their tribal identity and their Christian faith, infuriating Hindu nationalists.

“Seven districts of south Chhattisgarh known as the Bastar area are under the grip of organized terrorism by Hindu fundamentalists groups,” Pannalal told Morning Star News. “Their agenda is to overall create terror, thus establishing their supremacy, fomenting hatred, which in turn precipitates the Hindutva [Hindu nationalist] votes [out of hard-core religious bigotry].”

The Christian community, being neither militant nor uniform and having no representation in the state government, is a soft target, he said.

Markam and his household, including his parents, wife and five children, remain the only Christian family in Bargaon village, where tribal people make up 88.7 percent of the population, according to 2011 Census data.

On Nov. 10 Markam and local Christian leaders submitted a memorandum to the Gariaband District collector pleading for action against the attackers.

The Chhattisgarh Christian Forum has requested the district administration to hold meetings between Christians and their adversaries in disturbed areas, Pannalal said.

“The administration should take steps of preventive detention and assure that law and order situation does not go out of hand,” he added.

The forum also has approached several ministers in the Congress Party-led state government seeking their intervention.

India ranked 10th on Christian support organization Open Doors’ 2020 World Watch List of the countries where it is most difficult to be a Christian. The country was 31st in 2013, but its position has been worse each year since Narendra Modi of the Bharatiya Janata Party came to power in 2014.