Radical Hindu groups in India want to strip the constitution of its commitments to secularism. 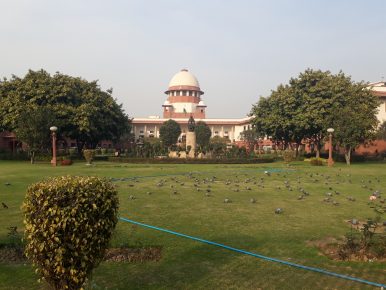 It is a dangerous time to be in India, especially for people who believed in the idea of India after the partition with Pakistan, and later generations that thrived on that idea. The idea of a nation of people from different regions, of different religions, and of different castes and colors is at risk.

The Hindu right-wing in India is busy trying to change the social fabric of the nation and turn it into a Hindu nation—run by the upper-caste Hindus. The goal now for them is to gain traction by changing the constitution. On August 27, Sanatan Sanstha, a Hindutva outfit in India, relatively unknown till a few years ago, held a press conference in Mumbai to demand removal of the word ‘secular’ from the Indian constitution.

The reason for such a demand, they believe, is because a secular constitution necessarily puts the people from the country’s majority religion at a disadvantage. The Hindu right-wing Bharatiya Janata Party (BJP) rose to power at the center in 2014, working on the fear that somehow India’s Hindu majority, who account for almost 80 percent of the population, are at risk of being taken over and dominated by minorities.

Understandably, working on this ideology of hate, there has been a tremendous rise in violence against the minorities (Muslims, Dalits, and Christians, in particular) in India, ever since they came to power. While the BJP cannot openly endorse such views, given the structure of the Indian constitution currently, it tries to make arguments about tinkering with the constitution mainstream through organizations like Sanatan Sanstha.

A little perspective is important here. The Indian interpretation of the word secular is different from how the western world understands it. While the general understanding in the west is that secularism is about non-religious matters or maybe atheism; in India, it veers towards being equally respectful of all religions. In the constitution, though, it stands for equal treatment of all religions. The word was added to the Preamble to the Constitution in 1976 through the 42nd Amendment during former Prime Minister Indira Gandhi’s tenure.

Per the Constitution, the state is equidistant from all religions, and every citizen is equal in the eyes of the law and enjoys same rights. The BJP—even the top brass including prime minister Narendra Modi—has regularly distanced itself from the word. It is seen by the party as a dirty word and a dirty ideology, practiced by intellectuals (another dirty word, under the current regime). The effort now is to mainstream fundamentalism and change the structure of Indian society as one knows it. Why must the word secular put the majority Hindus at a disadvantage, unless the goal is to put the minorities at a special disadvantage?

Last year, I had gone to Barmer (a district along the border with Pakistan, in the state of Rajasthan) to do a story on Hindu refugees from Pakistan. One person said he believed in the idea of Pakistan till he had to go to the courts for some grievance and the judge told him that he was listening to him out of compassion, but as a minority, he had no rights in the country. This person decided to leave Pakistan after that. This is what the BJP is trying to do in India: change the constitution to fit only the interests of the majority Hindus, where the others have no rights and no place to be.

Incidentally, Sanatan Sanstha is not representative of the Hindu religion. It is a fragment of the Sanatan dharma school of thought, who believe in idol worship and not all belonging to Sanatan Dharma are either members of the group or adhere to their philosophy. Although the people who do follow them have been accused of various terrorist activities in the country recently, most prominently for the murders of rationalist thinker Narendra Dabholkar and journalist Gauri Lankesh.

On August 28, just a day after this press conference, the Maharashtra Anti-Terrorism Squad (ATS) claimed in a special court that five recently arrested members of the Sanatan Sanstha had planned to plant explosives at 2017 edition of Sunburn, an annual electronic dance music festival in Pune. Any idea perceived as non-Hindu must be shunned, according to the group. Sanatan Sanstha denied that the arrested individuals were members.

This is where it becomes dangerous. Even as the circumstances deteriorate in India in terms of civil liberties, especially right now, when the government seems to be on a hunt for dissenters—a number of civil right activists and lawyers were arrested on August 28—there is a hope for recourse through the courts, even if only in principle. The government wants to change this once and for all. That is why a seemingly problematic organization with alleged terrorist links has the courage to speak out about changing this nation’s ethos.

The oath for any elected member of the Indian parliament goes: “I, (name), do swear in the name of God (or, solemnly affirm) that I will bear true faith and allegiance to the Constitution of India as by law established.” One can solemnly affirm, if one wishes. The Indian constitution gave the right to do so to every single citizen of the nation, and all have equal rights at the highest offices.

Santan Sanstha’s spokesperson Chetan Rajhans said that no other nation puts their majority religion at disadvantage. It is a suggestion contrary to the idea of India, as it was envisioned by the forefathers and as many citizens still seek. India was to be an inclusive nation—not a fundamentalist nation, and certainly not a theocracy. Why must we look inward now? Why must Indians regress to the level of unequal societies? Isn’t that really the truly anti-national thought?

Justice, in principle, means not leaving a single person aggrieved or denied of her/his rights. Why must such conversations come up which specifically deny that?