Bro. Ravi Bhushan and his wife Sis. Veena were invited by a believer to her house to pray in Lalganj, Bihar. A mob led by ABVP gathered outside the house and bet the missionaries severely. 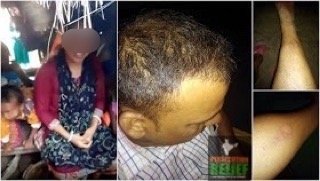 Bro. Ravi Bhushan (Lalganj, Bhojpuri 3 Zone) & his wife were invited to Sirsa Biran village to pray in a believer’s house on Sunday, 30thAugust 2020. While they were praying, one of the neighbours called several villagers and a mob gathered. The mob was led by ABVP (Akhil Bharatiya Vidyarthi Parishad).

The incident was live streamed on facebook by Mukul Pandey, a member of ABVP (Akhil Bharatiya Vidyarthi Parishad) who instigated and led the mob to abuse and beat the missionaries and to intimidate the believers.

The house to which the missionaries were invited were forced by the mob, led by ABVP, to drink ganga jal and to affirm their faith in Hindu religion.

Watch a collage of all these videos – https://youtu.be/dTl85icKluE

Bro. Ravi Bhushan called the police station for help and the police arrived and took them both in their custody. As soon as the news of their persecution reached, GEMS leaders with the help of Persecution Relief contacted the SSP (who was aware of the incident already) and he assured protection and release of the missionary couple. The missionaries were left in the night of the same day.

Since Legislative Assembly elections are coming up in Bihar certain anti-Christian groups are trying to use the agenda of conversion to unite people against Christians, to convert it into vote bank. Pray that the people may discern this evil strategy and to be wise.

Praise God for the release of the missionaries Bro. Ravi and his wife Sis. Veena.

Pray for their complete recovery and wellbeing.

Pray for the opposing people and organizations to not harden their hearts to the gospel, but to be touched & transformed by the love of Jesus Christ.

Pray for the persecuted believers and missionaries to be strong in the Lord.