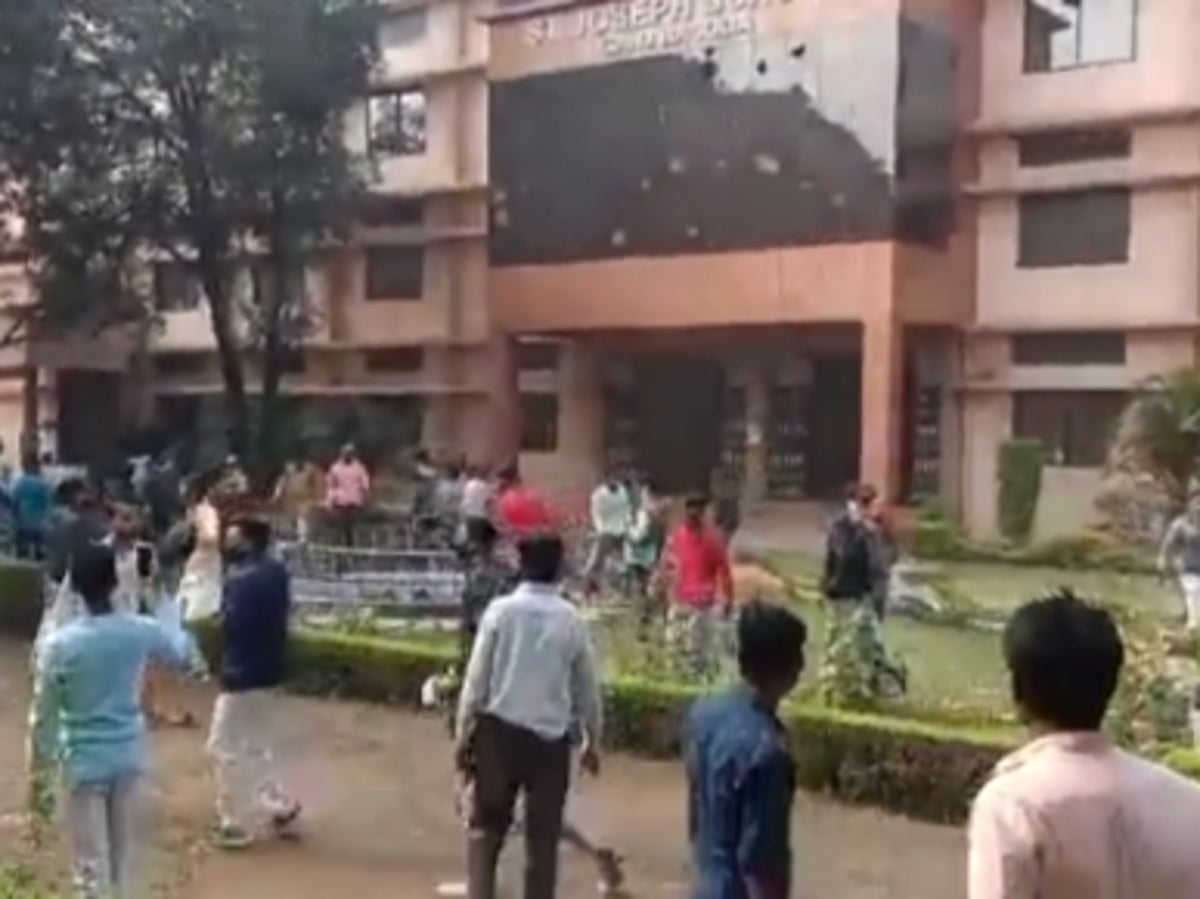 Around 400 alleged activists of right-wing organisations created a ruckus and indulged in vandalism at St Joseph’s School at Ganjbasoda in Vidisha district of Madhya Pradesh on December 6. It all started after a picture of eight Catholic children participating in a Holy Communion service went viral. The right wing activists alleged that the girls were being converted. On investigation, it was found that those children were not even students of that school. They studied elsewhere and were born Catholics; they were taking part in their religious ritual.

Police have registered a case of rioting against unidentified persons and detained four persons. Sub-Divisional Officer of Police (SDOP) Bharat Bhushan Sharma said that the accused were being identified and further legal steps would be taken in due course. The eyewitnesses inside and outside the school confirmed that stones were pelted at the school building and the mob went beyond the control of the organisers.

According to sources, eight children of the parish were given first Holy Communion on October 31. The pictures of the ceremony went viral on the WhatsApp groups and some mischief elements connected it with the school and displayed it on YouTube channel “Aayudh”. The Church is 2 kms away from the school and is run by the Sagar Diocese, whereas the school is run by the MMB Brothers.

On December 5th evening, a WhatsApp message along with a picture of the Holy Communion service went viral stating that a mass protest will be organized on the next day. The local people were asked to join in large number for a procession led by the Bajrang Dal and the VHP towards the school.

The message came to the notice of the school authorities, and on the same day, the police was informed about the radicals’ plan. The local Town Inspector (TI), Sumi Desai, assured them of protection. Simultaneously, the SGC Sisters in Vidisha met the DM and the SP and sought protection.

On the 6th afternoon, as per their schedule, the mob marched towards the school (from 200 metres away), shouting slogans and instigating the crowd. The school authorities tried to call the TI, but she didn’t reportedly pick up the phone.

The mob entered the school premises by breaking the gate lock, shouting slogans and pelting stones. At that time, around 16 students were appearing for their Class 12 CBSE exam. They, along with over 40 teachers, ran helter-skelter for their life. Many could not complete the exam and some of the students were shivering seeing the crowd and the stones coming into their classrooms. The police had been informed about the ongoing exams and the school authorities had sought protection.

After the incident was over, around 15 policemen came and tried to pacify the mob. Then the mob went over to other convent schools and the church in the town and raised similar slogans.

According to the school principal, Br Antony Basoda, they broke the glasses and destroyed the school property worth over Rs 15-20 lakh. Later in the evening, the DM and the SP visited the school and apologized. “But who will pay for the damage, and how to overcome the trauma of the students? What is the guarantee that we will not be harmed in the future?” asked Br. Antony.

The CBSE Regional Officer in Bhopal was intimated about the incident on the same day. And he has forwarded the message to the National office in Delhi. We are expecting some consideration for those students who could not complete the exam that day, he added.
The very next day, Br Antony met the Chief Minister who had come to Ganjbasoda to attend the wedding of local MLA Leena Jain’s daughter. He assured to look into the matter and take necessary action. What perturbs the minority community is that despite the national and regional media giving wide coverage to the incident, none of the politicians visited the school.

Ganjbasoda is a town situated about 50 kms from the district headquarters of Vidisha. Only 5 % parents of the school students are literate. The students are charged a fee of Rs 1000 per month. Over 20% students get free education and many deserved ones are also financially supported. The school with 1500 students imparts education from nursery to higher secondary under the CBSE mode.

The State Vishwa Hindu Parishad (VHP) office-bearer Nilesh Agrawal told media that they had only organised a peaceful protest outside the school and later submitted a memorandum to the local administration, and denied any role of the outfit in the disturbance at the institute. “We have nothing to do with the alleged ruckus as our protest was peaceful after informing the local administration. Several organisations have been protesting for the past one week against the conversion and demanding an investigation. Poor students brought from other states are being converted,” Agrawal alleged.

In a memorandum submitted to the local administration after the protest, the VHP, the Bajrang Dal, the Hindu Jagran Manch and other right-wing organisations accused the school management of converting eight students to Christianity. In the memorandum, these outfits accused the school management and the church associated with it of forcing students to not apply ’tilak’ on the forehead and wear ‘kalawa’ (a sacred thread worn by Hindus on wrist).

It was also alleged that the students are forced to say prayers of Christianity. However, in a letter to the District Collector, the Church authorities denied allegations of religious conversion and claimed that rituals performed for the eight Christian children were like ‘Janeu Sanskar’ in Hinduism (related to wearing a white, sacred thread).

Bishop James Athikalam of Sagar Diocese said: “I strongly condemn the dastardly attack. There is no reason whatsoever to attack the institution, falsely accusing that eight students were forcibly converted when those students did not even study in that school. It was done intentionally by vested groups for their evil intentions. The civil administration miserably failed to protect the ordinary citizens of the country, especially the Christian minorities”.

“The Ganjbasoda incident is not the only one. Recently we had faced disturbances in two other places from anti-social elements and civil authorities. They are trying to destroy the peace of Christians. We want the Government to act and punish the culprits immediately,” informed Fr Sabu Puthanpurackal, PRO of Sagar Diocese.

The Sagar Diocese Bishop and the PRO met the Commissioner for Minorities and Backward Classes Mr Gopal Dand and DGP Rajender Mishra. They too assured the Church authorities of looking into the matter and gave directions in this regard.

In a letter, the church accused some local YouTube channels of spreading false news of religious conversion and creating communal tension, and demanded penal action against them. On the other hand, the school principal, in a separate letter to the SDOP, sought protection for staff members and students, mentioning that the CBSE exams are in progress.

Meanwhile, Archbishop Sebastian Durairaj has met Madhya Pradesh Home Minister Narottam Mishra. He assured the Bishop that the police had been directed to ensure that such incidents are not repeated. “The type and nature of Ganjbasoda incident is different. Four persons have been detained and directions issued that such incidents should be prevented,” Mishra told reporters.