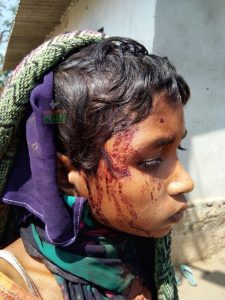 Even in death, Christians are persecuted, Odisha

Tangaguda village in Malkangiri district of Odisha, has around 35 families residing there, of which 3 families are followers of Jesus Christ who worship at IMST.

On 27th February, Bro. Sukra Markhami’s daughter aged 2 years, passed away. As they got ready with the preparations for the last rites and burial on the family property, the local villagers stopped the funeral and demanded that they bury the body of the child outside the village.

Emotions can become powerful during the time of death of a loved one.  Bro. Sukra was adamant that as a parent, he had the right to bury the child on his own property.  Ultimately the villagers conceded that the family may bury the child on their land, only after fixing a payment of Rs. 5000/- as “penalty amount”. After paying the villagers and the burial of their child, the family retired for the night. In a previous incident, the villagers had penalized Bro. Markhami’s family of several thousands of rupees and a cow as ‘penalty’.

Later that night, around 12.30 am, this mob of 25-30 local village fundamentalists, trespassed illegally into Bro. Sukra’s property, in an intoxicated state. They laid hold of Sis. Debe Nande, the grieving mother. She heard the attackers planning to take diesel and set her ablaze. By the grace and mercy of God, she managed to give them the slip and fled for her life, in the cover of darkness, into the nearby jungle. The other 2 members of the family, Bro. Sukra and his 12-year old daughter Savitha were not spared. She was brutally beaten and hit on the head and suffered horrific and critical injuries. Both were left unconscious after the violent beating.

The 2nd Christian neighbour, Jaga Markhami who came to their rescue, was overpowered by the mob and also brutally beaten. They broke his leg leaving him unconscious. Cash of Rs. 10,000/- was stolen from his house and his cycle damaged beyond repair.

The 3rd Christian neighbour Ganga Markhami also suffered the same bloody and vicious attack and was left unconscious with a broken left hand.

Gratified that they had killed the Christians, the persecutors left the bloody crime scene.  When other believers learned about what transpired, they contacted the local Pastor Mala who arranged for all the Christians to be rescued from the village.

The 6 victims who survived this senseless act of violence, with varying degrees of critical wounds, are currently admitted and being treated in the local government hospital. Evangelist Sashi Bhusan is with them at the hospital.  To add insult to injury, Bro. Sukra Markhami’s home has been completely burnt and razed to the ground. The families have been left bruised and dumbfounded with this deadly display of hatred, intolerance, discrimination and violence against them.

On the 01st of March, Police negotiated a “Peace agreement” between the 2 parties. However, the case registered against the persecutors stand.

As Christians, we need God’s abundant grace and not be fearful or troubled at these events. Jesus Christ himself spoke of the world’s hatred towards Christians:

Persecution Relief is assisting the families with their relocation and medical expenses.

There has been massive generation of traffic to this particular story on social media where it has been falsely stated that Sis. Debe had been burned. While it is true that the persecutors did indeed try to burn Sis. Debe, she is now well and alive. The lack of credible information from official sources is one of the prime reasons why false messages spread like wildfire over social media.

Articles/photos may be reprinted with credit to Persecution Relief News

11 thoughts on “Even in death, Christians are persecuted, Odisha”