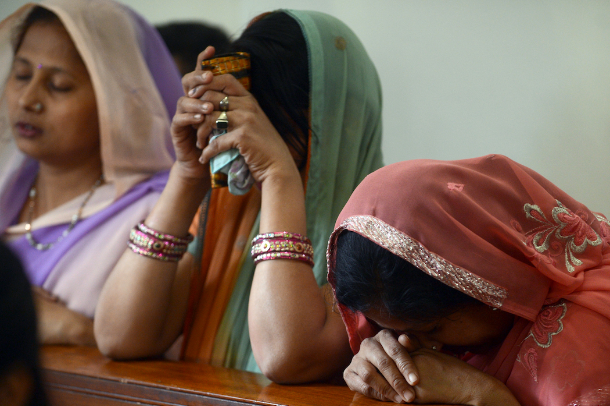 A file image of Indian Catholics praying during a Good Friday Mass at The Sacred Heart Cathedral in New Delhi. Christians account for 2.3 percent of India’s billion-plus Hindu-majority population. (Photo by Raveendran/AFP)

Sign up to receive Persecution Relief Daily News
Saji Thomas, Bhopal
India
July 23, 2018
Christians of different denominations across India remembered those killed for their faith with prayers on July 22.Christian groups, mostly Pentecostal and Protestant churches, observed Indian Christian Martyrdom Day praying for those killed mostly by Hindu hardliners.  “At least 10 Christians have been killed in the past three years amid continuing persecution,” said Shibu Thomas, the founder of Persecution Relief, an ecumenical forum that initiated the event last year.The occasion aims to pray for those killed and embolden Christians to live their faith, said Thomas.Among those killed were a 14-year-old schoolgirl in central India’s Chhattisgarh state who was raped and murdered. “The girl was attacked because her family refused to abandon their Christian faith,” Thomas told ucanews.com.Three years ago, Sonawati Dhan watched as her husband and local pastor Chamu Hasda Purty were shot dead in front of her. Her four children were also witness to the killings.Dhan said the observance of the day “is an encouragement” for her continued “work for preaching [the word of] God” in Jharkhand state.Christian Martyrdom Day began last year out of concern in the increase in violence against Christians across the country. Christian leaders say this has occurred since the pro-Hindu Bharatiya Janata Party (BJP) swept to power in New Delhi four years ago.Thomas said his organization has recorded 508 incidents of attacks against Christians from January to June this year so far. His foundation recorded 732 such incidents in 2017, double the incidents of violence that occurred against Christians a year prior.Besides being subjected to violence, Christians also face police probes over charges related to allegations of sedition, discrimination and insulting religions, Thomas said.Father Maria Stephen, the public relations officer of the Catholic Church in the central Indian state of Madhya Pradesh, said most Catholic dioceses in the state also joined to mark the day with prayer.Most attacks occur in the northern part of India where Christians are less than one percent of the population in a predominantly Hindu society. Missionaries and pastors and even ordinary Christians have been attacked and accused of converting people from the indigenous and Dalit (formerly untouchable) communities.There are 27 million Christians among India’s population of 1.2 billion people. Some 20 million of those Christians live in either the southern states or northeastern states
DISCLAIMER:
Persecution Relief wishes to withhold personal information to protect the victims of Christian Persecution, hence names and places have been changed. Please know that the content and the presentation of views are the personal opinion of the persons involved and do not reflect those of Persecution Relief. Persecution Relief assumes no responsibility or liability for the same. All Media Articles posted on our website, are not edited by Persecution Relief and is reproduced as generated on the respective website. The views expressed are the Authors/Websites own. If you wish to acquire more information, please email us at: persecutionrelief@gmail.com or reach us on WhatsApp: +91 9993200020