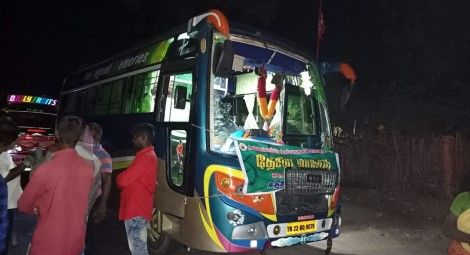 Christians attacked on way back from national meeting

A group of 70 Christians were attacked on 5 February whilst travelling home from the Third National Congress of the Synod of Pentecostal Churches in Coimbatore, Tamil Nadu.

Three men on motorcycles targeted the bus and minivan, in which the group was travelling at approximately 12:15am at Anna Nagar, on the Bhavani Sagar Road, Erode, Tamil Nadu. The men verbally threatened the passengers before smashing the windshields of the vehicles, causing injury to the driver and passengers, which included women, children and the elderly.

Pastor Paul Raj, one of the passengers, immediately called the police, who arrived at the scene 15 minutes later. A First Information Report (FIR), which is necessary to start an investigation, has reportedly been registered against the perpetrators and investigations have been initiated.

The National Congress of the Synod of Pentecostal Churches was attended by an estimated one hundred thousand people. Local sources report that the attack is believed to have been perpetrated by religious extremists who were aware of the national congress and planned the ambush on the Christians.

The national congress focused on calling on Christians to pray for peace in India at this time, particularly as Christians are experiencing a rising number of hate campaigns that involve church closures, prayer meeting disruptions, police complicity and targeted attacks with impunity by non-state actors. The leadership of the Synod had also called on the government of India to protect religious minorities in the country who are living in fear and to respect the fundamental freedoms of the Indian Constitution. There was also a call for the government to revoke the Citizenship Amendment Act 2019 (CAA) and the National Register of Citizens (NRC) which are criticised widely in India for their unconstitutional nature.

CSW’s Chief Executive Mervyn Thomas said: “This attack on a group of Christians returning from a national gathering is a worrying example of the religious intolerance and violence that is being allowed to fester and take root in the largest democracy in the world. Religious minorities in India should feel safe and free to practice and profess their religion or belief without any fear of reproach, and we call on the authorities to put an end to all forms of institutional propaganda that incite hate towards religious minorities. The police must follow up with a thorough investigation of this incident and not allow themselves to be influenced by hardline religious nationalists as they seek to hold those responsible to account.”