Charges Fabricated against Pastor, Others after Assault, Sources Say

February 9, 2021 By Our Southern India Correspondent – Leave a Comment 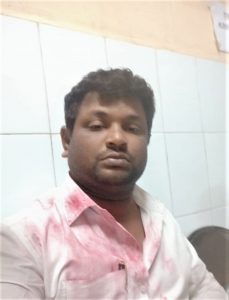 HYDERABAD, India (Morning Star News) – Police in southern India have filed false charges against a church pastor after tribal animists assaulted him for his faith so severely that he was hospitalized for two days, sources said.

The pastor and three others face a range of fabricated charges such as causing hurt and, in the pastor’s case, sexual harassment, filed in retaliation for his reporting a Jan. 3 assault on him by a mob of about 20 tribal animists in Abbigeri village, Koppal District, Karnataka state, sources said.

“It appears the police came under pressure after the assailants got to know about the cases filed against them,” Shyam Sundar, an attorney representing the pastor told Morning Star News. “As a counterblast, they filed a petition with the same contents filed by Christians against them, alleging that Pastor Lamani assaulted a woman and that his wife and the other believers also have insulted the Banjara community members.”

The mob dragged pastor Devendhrappa Jamalappa Lamani from a home where he was teaching from the Bible to three other Christians families at about 6 p.m., he said.

“They did not say a word and simply held me by the collar of my shirt and dragged me outside the home,” Pastor Lamani told Morning Star News. “They pushed me, held me by my legs and dragged me onto the road and started beating me.”

In foul language they told him he had maligned their Banjara tribal culture by introducing a foreign faith and that he was a traitor disloyal to his motherland, he said.

“They repeatedly told me that it is better for me to die than live a disloyal life by corrupting the Banjara population’s minds with teachings of Jesus,” said Pastor Lamani, also an ethnic Banjara. “Each of them was taking turns to jump on me, kick me and punch me. It was like how villains attack in movies. They were beating me up like professional wrestlers.”

The pastor’s wife and other Christians tried to rescue him and were also attacked. A tribal leader from the village came and asked the mob to stop beating the pastor, telling them that he might die if they continued, Pastor Lamani said.

“I still have pain in my chest, as they jumped on and kicked my chest with their shoes,” he said. “I am unable to raise my left hand; it feels very sore and painful. I am experiencing hearing issues in my left ear. I have not been able to chew food, there is severe pain in my jaws. They punched on my jaws like professional boxers.”

Doctors at the hospital told him that he had internal muscle injuries, he said, adding that he was still suffering body aches.

After the Karnataka-based attorney for legal advocacy group Alliance Defending Freedom India advised the pastor to obtain medical reports from the Koppal town hospital, district pastors on Jan. 4 urged police to register cases against the assailants based on the medical evidence, the ADF India attorney said.

Koppal Rural police registered a First Information Report (FIR) against six of the 20 assailants – the only ones the pastor could name – for criminal intimidation (Section 507 of the Indian Penal Code), insult intended to provoke (Section 504), rioting (Section 147), house trespass (Section 448), being a member of an unlawful assembly (Sections 143 and 149), voluntarily causing hurt (Section 323) and assault or use of criminal force to outrage modesty of a woman (Section 354).

“After the police registered cases against the assailants, the Banjara leaders lodged a counter-complaint against me falsely alleging that I had outraged the modesty of a woman,” Pastor Lamani said. “I don’t even know the woman whose name they have mentioned in the complaint.”

The only time he goes to Abbigeri village, about 9.5 miles from his home in Koppal, is to lead worship on Fridays, he said. A total of 14 Banjara families have put their faith in Christ there, he said. The baseless sexual harassment charge against him was designed to humiliate him into staying out of the village, sources said.

The FIR registered against Pastor Lamani and three people who tried to rescue him – his wife and another Christian couple, Mallikarjuna Mukkumbi and Sanna Savithrevva – lists the charges as criminal intimidation (Section 506), inducing a person to believe that he will be rendered an object of divine displeasure (Section 508), voluntarily causing hurt (Section 323), wrongfully restraining any person (Section 341), insult intended to provoke breach of peace (Section 504), assault or use of criminal force to outrage modesty of a woman (Section 354) and abetment (Section 114) under the IPC.

Officers at the Koppal police station were unavailable for comment despite several attempts to reach them.

“We gathered in this house for nearly seven years every Friday for evening Bible study despite the opposition from the tribal leaders,” Pastor Lamani said. “I never took their warnings seriously.”

A district and sessions judge in Koppal on Friday (Feb. 5) granted anticipatory bail to Pastor Lamani, his wife and the other accused Christian couple.

Prior to becoming a Christian, Pastor Lamani at age 17 had burned Bibles and insulted a pastor who had arrived to proclaim Christ in their village in Haveri District, he said.

“I had set the Bibles ablaze to demonstrate to people that it is only a paper,” he said.

He refused to listen to anyone talking about Christ until he heard a radio program in his native Banjara language, he said.

“The message that God gave Himself on the Cross touched my heart, but I did not tell anyone about it,” Pastor Lamani said. “The next day I was waiting for a bus. A pastor came up to me and asked in the Banjara language, ‘Do you know about Jesus?’”

He told him that he had heard a little about Him but didn’t know much.

“Then he took me to his house, shared the gospel with me and prayed for me,” Pastor Lamani said. “He gave me a Bible and the promise in John 1:12. It changed my life.”

Soon he went to Bible college and heard a call to serve as a pastor, he said.

“I obeyed the calling and have been on this journey for nearly two decades now,” the 41-year-old father of two said. “My wife and I have been ministering among the Banjara hamlets. We face severe opposition wherever we go, but God never sent us back empty-handed. We have witnessed to our community who worship the nature and every idol they see and have been touched by the living God.

“My wife and I are remembering the assailants in our prayers every day. We are confident that Lord will turn them towards Him someday.”