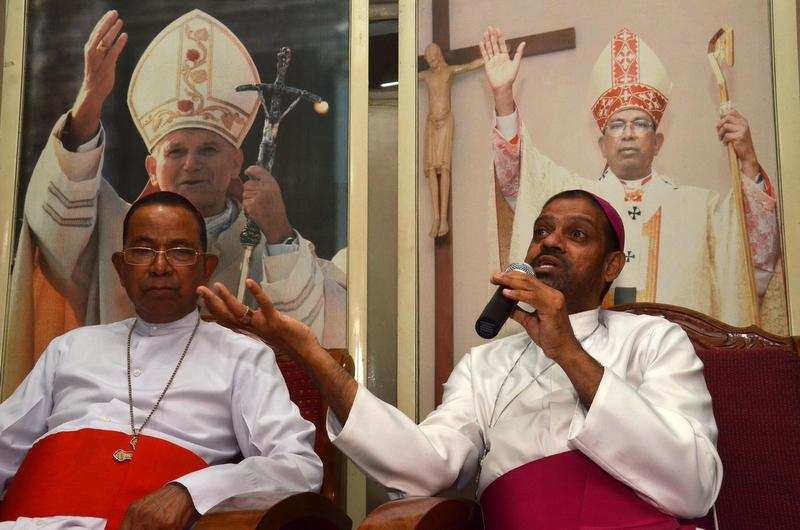 Ranchi: The highest body of Roman Catholic Churches in the country on Sunday said the state government is “targeting” the  Christian community

Refuting the charges levelled against the headmaster of the Roman Catholic School,
Burudih atKochang village inKhunti district, the
Catholic Bishops’ Conference of India

(CBCI) sought an impartial investigation into the alleged gang rape at the village on Tuesday. “We don’t know what mistakes we have made. Maybe government agencies have been targeting Christian missionaries because of the fight we have taken up to protect the land rights of the tribals,” general secretary of CBCI Father Theodore Mascarenhas, who was at Archbishop House on Sunday, told TOI.

Five women were reportedly gang raped after they were taken away at gunpoint while they were performing a street play at the school. The following day, Father Alphons Aind was picked up by police for interrogation but released a day later. Soon after, police levelled nine charges against him, including omission during crime, accusing him of “not doing anything” when the girls were raped.

“ We could have believed something was wrong if there were one or two charges against him. With nine charges, it is evident police want the person to remain behind bars,” Mascarenhas said.

Asked if the church body would intervene in the matter, Mascarenhas said a meeting of Jesuit Fathers was convened on Sunday. “CBCI does not usually interfere in local matters. We have asked two provincial sisters to look into the incident. After their report is submitted, CBCI may intervene,” he added.

In the aftermath of the incident, the alleged links between the Church and Pathalgarhi, a movement for tribal autonomy , have been brought up for discussion. The CBCI, on its part, denied any involvement.

Challenging the state government to prove the association of churches with Pathalgarhi, Mascarenhas said, “It is easy to assign blame. If the government is so sure, why don’t they come up with documentary evidence? Is there any letter or public statement issued by the churches to encourage Pathalgarhi anywhere in the state?”

He added, “Pathalgarhi is an age-old tradition of tribals everywhere in the country. The government should preserve their customs if they want the tribals to lead a normal life here. However, instead of protecting tribal tradition, the government is naming it a criminal act.”