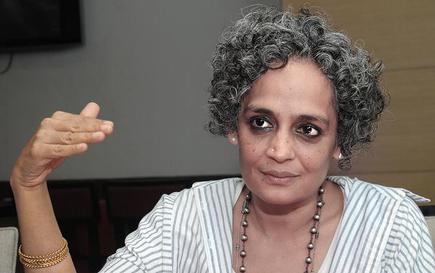 Following the arrests of civil rights activists and lawyers on Tuesday, writer Arundhati Roy said the situation in the country could become “more serious” than it was at the time of the Emergency in the mid-1970s.

“The events that are unfolding are being fuelled by an intent to do away with democracy and turn this country into a Hindu state,” Ms. Roy told The Hindu.

“It is an overt statement of intent, now. This, potentially, is more serious and more dangerous than the Emergency. This time, it is the state itself that is unleashing a law and order problem on minorities, on Dalits, Christians, Muslims and Leftists and anyone else who disagrees — through its proxies in the media, its murderous vigilantes and hate-speech vendors. Everyone who disagrees with a particular ideology is being criminalised, incarcerated or, assassinated by shadowy right-wing killers,” Ms. Roy said.

“In the ‘big picture’, the arrests of lawyers, intellectuals and Dalit activists — and the lack of arrests of lynchers and hate-criminals — are a part of a relentless ideological attack on the letter and spirit of the Indian Constitution.”

In an e-mailed statement, earlier in the day, Ms. Roy said, “The simultaneous state-wide arrests are a dangerous sign of a government that fears it is losing its mandate and is falling into panic.”

“While killers are being garlanded and protected by people in high places, anybody who speaks up for justice or against Hindu majoritarianism is being made into a criminal. What is happening is absolutely perilous. In the run-up to elections, this is an attempted coup against the Indian Constitution and all the freedoms that we cherish,” she noted.

The Hindu
DISCLAIMER:
Persecution Relief wishes to withhold personal information to protect the victims of Christian Persecution, hence names and places have been changed. Please know that the content and the presentation of views are the personal opinion of the persons involved and do not reflect those of Persecution Relief. Persecution Relief assumes no responsibility or liability for the same. All Media Articles posted on our website, are not edited by Persecution Relief and is reproduced as generated on the respective website. The views expressed are the Authors/Websites own. If you wish to acquire more information, please email us at: persecutionrelief@gmail.com or reach us on WhatsApp: +91 9993200020