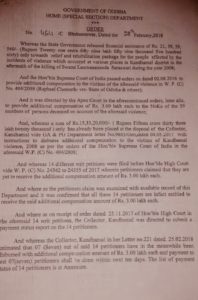 Fourteen Kandhamal victims have received enhanced compensation of Rupees Three Lakhs each following writ petitions filed by lawyers of ADF India in the High Court bearing WP(C) No.24342 to 24355 of 2017.

In addition, in The compliance order of the Special Secretary, Home Department says that an amount of Rs.15,33,20,000/-(Rupees Fifteen Crore thirty lakhs twenty thousand) have already been placed at the disposal of the Collector, Kandhamal with necessary instructions to disburse the amount.

“Today, justice has been granted to the victims of religious persecution in India. We welcome the decision of the High Court to compensate the families which suffered under the Kandhamal violence almost ten years ago. As we remember the brutal riots against religious minorities in this region, we must not forget that justice is the first step towards reconciliation. Nobody should be persecuted because of their faith. With its judgement, the Court has reaffirmed the constitutional right to freedom of religion in India,” said Tehmina Arora, a human rights lawyer and Director of ADF India, who litigated the cases on behalf of the victims of violence in Kandhamal.

The victims are the families who lost a family due to the unprecedented violence against Christians in the year 2008. The estimated number of people affected by the communal violence spread out in 415 villages in 12 blocks of Kandhamal district is 150,000. By late September/early October 2008, a total of 13 relief camps had been set up by the government across the district for an estimated 75,000 people.  There have been more than 3300 complaints, but only about 820 FIRs were registered. Out of these, only 518 cases were charge-sheeted. The police treated the remaining cases as false reports, allegedly due to lack of evidence. Out of the 518 cases that were charge-sheeted, 247 cases were disposed off. Out of the 30 trials for murder, the courts convicted accused in only two cases. There have been convictions in 4-5 other murder cases, but for lesser offences. Out of 727 cases that were tried in two fast track courts, only 46 (5.13%) of the 895 accused were convicted and 793(88.60%) acquitted.