In 2008, Kandhamal, Odisha witnessed unprecedented hostility in which 56,000 people were left homeless, and 308 churches were destroyed, at least 101 Christians were killed and 40 women were sexually assaulted (rape, molestation and humiliation). Many educational institutions, social service organization offices and healthcare institutions were looted and destroyed. Twelve years after one of the worst instances of communal violence India has witnessed, the victims in Kandhamal still await justice. Despite the mainstream Indian society and media trying hard to erase the memories of the gruesome inhuman violence, it remains fresh in the minds of those who were the victims of the communal frenzy. Odisha continues to be witness to violent attacks on minority communities, particularly the Christians and more specifically those hailing from Adivasi and Dalit backgrounds.

Susmita Pradhan, an Adivasi social worker from Kandhamal, says, “To speak about Kandhamal riots is to speak about my home and to speak about the riot against Christians in Kandhamal is to write my own story. I was victimized and I still am a victim. Yes, I am a Kondh, an Adivasi and I believe in Jesus Christ! Is that a crime or anti-Constitutional? The memories of the burnt and broken remnants of my in-laws’ house still haunt my mind. We could not enter the village for two years. That in fact had been my home for years since my marriage. Suddenly my own home turned into an alien space, with an unwritten ‘No Entry’.”

Ludia Pradhan, then 70 years old, had to run for her life when the rioters came and burnt down her house in Godabisa village. “I spent two nights in the jungle before our house was burnt down. All ran to the nearest forest to hide themselves. Still I am unable to understand how my husband and I climbed the hilly forest, because we were not young,” recalls Ludia Pradhan.

In 2016, late Mangalakarani Pradhan told me, “In Kurmingia village our home was spared, but there were some who lost their houses. It is a small village in terms of population. The rioters came. Trees were cut, roads were blocked, shops were raided and burnt, and all entries to and exits from the village were disrupted. For many days I was in fear and was hiding in the paddy field. I got rid of all my valuables while escaping. On most of those nights, I felt that my life would come to an end.” Her son Nikhil Pradhan, who is a schoolteacher, says, “The fear we all lived in cannot be narrated in words. I was outside the village and my mother was in the village. We didn’t know if she was still alive or dead. Completely clueless! No phones, no mobiles were functional then. It was after a week that my brother-in-law, who is a journalist, could enter the village and bring her to Phulbani.”

For thousands of people the year 2008 and the following years were very hard. They were hunted like wild beasts, beaten, burnt and killed. The fear and the scars are still alive. Mangalakarani Pradhan was protected by her non-Christian Kondh neighbours. The entire Kandhamal witnessed the madness of hate, jealousy and revenge as houses were razed, shops looted and burnt, properties destroyed, and crops and food supplies burnt. People left their homes and villages and ran for their lives. Stories of arson, rape, murder reached the ears of everyone on the run creating more fear. Many family members lost track of their dear ones.

The violence in 2008 came as a result of the long hate campaign by Hindutva organizations right from 1960s, with periodic attacks on Christian places of worship, priests and nuns and later on generally Christians and small informal congregations. The violence, arson and killings in Kandhamal were not a religious riot between two communities, but a pre-planned attack targeting Christians, particularly those from Dalit and Adivasi background. Both the social groups have always tried to break the shackles of the slavery of caste, but the dominant caste lords haven’t been able to accept it. In Kandhamal, Christians are in a majority. However they remain as a political minority for historical reasons. In fact, the attack on them was motivated by politics and economics, but cloaked in culture. It had little to do with religion.

In August 2016, the Supreme Court ordered that the state government re-investigate 315 cases of violence reported during the riots in which police did not follow up or the perpetrators were not prosecuted. The country’s top court also noted the inadequate compensation to some of the victims and ordered that damages be paid to anyone injured during the riots. No concrete results or follow-ups of this order have been yet made public by the Odisha government. 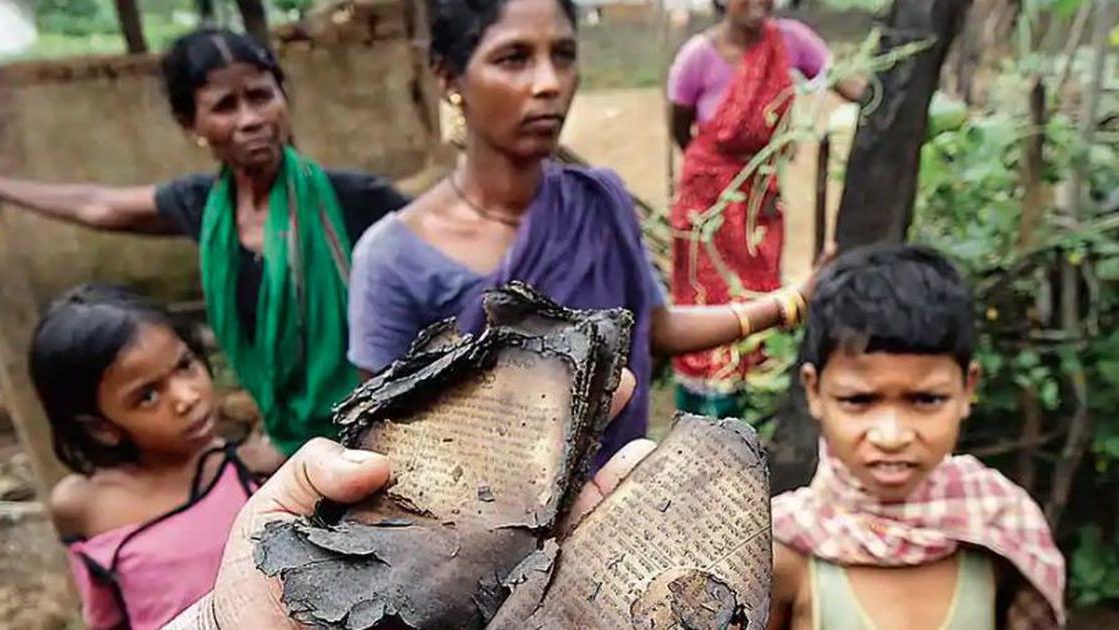 Since 2010, the victims have been regularly organizing protests and marches. In 2015, August 25 was declared as Kandhamal Day, the day which marks the beginning of the year-long violence against Christians. Even shortly after the violent attacks, peace committees were formed with members of different social groups and religious denominations in most of the affected villages.

I was witness to a peace march held in G. Udaygiri in 2017. It culminated in a public meeting and halfway through it, there was heavy rain but not a single member of the audience walked away. Many victims spoke of the painful memories of violence and terror that stuck them. It was an opportunity for them to listen to each other’s stories – more than anything they could read in the newspaper or see on television. Some women fixed their eyes on the posters hung at the venue that had the pictures of their loved ones as tears flowed down their cheeks.

The National Solidarity Forum, representing 70 national and regional organizations, has said: “During the communal violence in Kandhamal, there have been more than 3,300 complaints, but only 820-odd FIRs [25 per cent] were registered. The rest of the complaints were not even registered. Among these complaints, only 518 cases [63 per cent of FIRs and 16 per cent of total complaints] were charge-sheeted. The remaining cases were treated as false reports. And out of these 518 cases, 247 cases [48 per cent of total chargesheeted cases and 7 per cent of total complaints] were disposed of. The rest of the cases are pending before the sessions and magistrate’s courts. And among those cases which have been disposed of, many are already acquitted.”

According to a study conducted by Vrinda Grover, senior counsel in the Supreme Court, and Saumya Uma, professor of law, the conviction rate is as low as 5.13 per cent of the chargesheeted cases and 1 per cent of the total complaints. Several cases of forced conversion to Hinduism by the Sangh Parivar have been reported. This organized communal attack also spread to other parts of Odisha and other states as well. The compensation provided by the government for the victims of Kandhamal has been minimal.

K.P Sasi’s documentary “Voices From The Ruins, Kandhamal In Search Of Justice” raises some burning questions about the social reality of the present times. This documentary brings to us the naked reality of the repression and oppression that the Adivasis, Dalits and Christian converts face in Kandhamal. In this film we hear the screams of the people who have lost all hopes, whose dreams have become nightmares by the continuous violence they have been subjected to for the last 50 years. The religious and casteist hatred and rising intolerance should be able to bring the democratic, progressive forces into a socially transformative reality. That has not happened to date.

Based on the Supreme Court judgment there is a public outcry to reopen the 315 cases that have been closed/acquitted. Another demand is to reinvestigate the original 3300 complaints to bring the truth. The then UN special rapporteur, Miloon Kothari, had recommended up to Rs 500,000 as compensation to those who lost their businesses, which is yet to be provided. A good number of videoclips, photographs and audios provides ample evidence that it was not just the non-state actors, but also state agencies who were involved in either organizing or propagating or aggravating the violence. It also raises questions on the constitutionality of Odisha anti-conversion law. Dalit and Adivasi Christians have also challenged the Presidential Order 1950, para 3 that delinked converted Scheduled Castes from affirmative action. They say this impinges on their freedom of religion guaranteed by the Constitution.

This plight of the Christians in Kandhamal is ample evidence of the upper caste belief that Adivasis and Dalits are there to be exploited. The situation calls for not just peace and justice but restoration of human rights that these people have long been denied. As Susmita Pradhan says, “We are the inhabitants of this land and soil. Hence we do not fear to fight for our rights. One should not welcome those people who cause communal violence and create fissures between two sections. We certainly need to raise our voices against them.” The question is: Will the Constitution merely remain on paper – which is the case as far as these Adivasis and Dalits are concerned – or will it translate into reality? The countless sagas of fear and agony from Kandhamal are still alive with hopes that one day they will be free citizens of this nation.