1 Pastor, 2 Believers arrested and 5 others have been charged of conversion, Jharkhand 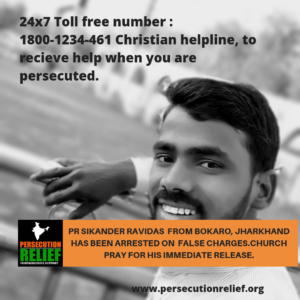 Pastor Sikander Ravidas, his father Binod Ravidas and 1 Believer were arrested under 298 IPC 4/5, ‘Jharkhand Dharma Swatantra Adhiniyam’, 2017. The bail plea at SDM Court was rejected and they have now appealed for bail on the higher court. 5 others have also been booked but not arrested.

This Bill, prohibits conversion from one religion to another, by use of force or allurement or by fraudulent means and for matters incidental.

Punishment for contravention of the provision of section 3:

“Any person contravening the provision contained in section 3, shall without prejudice to any civil liability, be punishable under imprisonment, which may extend to 3 years or with a fine which may extent to fifty thousand rupees or with both; provided that in case the offense is committed in respect of a minor, a woman or a person belonging to the Scheduled Castes or Scheduled Tribes, the punishment shall be imprisoned to the extent of four years and fine up to one hundred thousand rupees (one lakh rupees)”.

Pastor Sikander Ravidas is affiliated with Sower Mission Church. The Church is built on his own land, owned by his grandfather, at Pipradih village, Chandrapur Block, Bokaro district in Jharkhand State.

A false complaint was lodged by Manir Das, the main persecutor, claiming that Pastor and family were alluring Dalits and converting them to Christianity.  He also mentioned in the complaint that the land where the Church has been built, is government land.

Speaking to Persecution Relief, Pastor Manoj Ravidas who lives around 10 kms away, and involved with the same mission work, said that the Village Head, Sudershan Das, has been harassing Pastor Sikander, without any reason.

Many false and baseless allegations were made, and the Police, without verifying the veracity of the statements, have arrested 3 people, including Pastor Sikander, his father and one more Christian, who are now locked up in jail.

Church, pray for the release of all 8 people at the earliest.

Pray also for the Police who are under pressure from the religious fundamentalists and the government,  that they may do their duty, without bias or prejudice against castes and religions. ‘